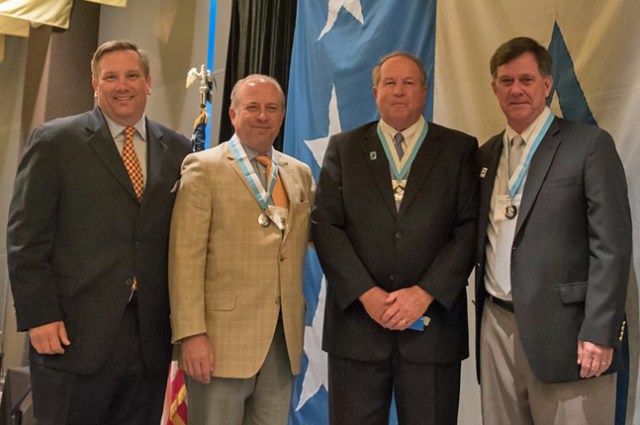 Long time Alumni Leaders,  Mark B. Chandler ‘81, John C. McGoogan ‘70 and E. Davison Burch ‘65 were all awarded the Legion of Merit Award. This award was established in 1978 for service to Phi Delta Theta.  National describes the honor this way, “Selected by the General Council of Phi Delta Theta, the individual who receives this recognition has rendered distinguished service to the Fraternity above and beyond the call of duty.” More telling is that this honor has been bestowed on less than 100 men since it’s inception nearly 40 years ago and was given to three Georgia Alpha alumni in the same year as National awarded the chapter top honors!

Brother E. Davison Burch was initiated into the Georgia Alpha Chapter at the University of Georgia on September 16, 1962.

During his days as an undergraduate, Brother Burch served the Georgia Alpha Chapter as an officer, and for nearly 20 years now, has contributed his time and energy to this same Phi Delta Theta chapter as an officer of its House Corporation, serving as its President for most of those years.

Professionally, he has been an attorney in Georgia since 1967, specializing in business litigation, corporate, banking, health care and employment law. Brother Burch is a member of the Western Circuit Bar Association, the State Bar of Georgia, the Georgia Defense Lawyers Association and a Fellow of the American College of Trial Lawyers. He and his wife Devereux Cain Burch reside in Athens, where he is with the law firm of Blasingame, Burch, Garrard, Ashley, PC.

Brother Mark Chandler was initiated into the Georgia Alpha Chapter at the University of Georgia on February 23, 1978. After graduating in 1981, he pursued a Masters in Accounting at Georgia State University.

Professionally, Brother Chandler has decades of experience in Atlanta that include the Trust Company Bank, Arthur Anderson & Company and J.W. Bell Enterprises, Inc. He is President and Founder of Habersham Properties, an Atlanta property management and brokerage firm. Mark is a certified public accountant and has held a real estate license with the Georgia Real Estate Commission for more than 15 years. He has been an active real estate investor for more than two decades.

Mark’s numerous civic endeavors include serving the Northside United Methodist Church as a member of the Finance Committee, the Stewardship Committee, Stephens Ministry Program and Christian Activities Board. He is a member of the Buckhead Rotary Club, and is the Director and CFO of the CLC Foundation, as well as an Advisory Trustee of the UGA Foundation. He is also President and CEO of Bailey-Johnson Heights and the Founding Organizer and Director, Advisory Board Georgia, for Georgia Commerce Bank/Iberia Bank.

Brother Chandler has two grown children, one of whom is a Phi Delt from the Alabama Beta Chapter at Auburn University.

Brother John C. McGoogan III was initiated into the Georgia Alpha Chapter at the University of Georgia on February 6, 1968. As an undergraduate, he held the office of Vice President.

For many years, Brother McGoogan’s professional background was centered around the mortgage banking industry. He is currently President of The Prestwick Capital Group, a privately held investment company initially formed to invest in earning assets, consisting of real estate, mortgage banking consulting, restaurants and financial instruments. He is also President of The Prestwick Lending Group in Atlanta, a specialty lending company providing financing to certain segments of the food services industry.

Brother McGoogan has served on the Chapter Advisory Board of the Georgia Alpha Chapter for 16 years, and he is currently President of the House Corporation. During the late 1990’s when the Georgia Alpha Chapter house was in dire need of improvements, John and other alumni launched a capital campaign to completely refurbish the house. He found himself in the position of campaign manager, as this group of alumni successfully raised $200,000 to put the house back into good working order and created a reserve for future needs.

Around 2007, the fraternities on Lumpkin Street in Athens began negotiations with UGA for creating a Greek Park and having all the chapter houses on Lumpkin Street move to that park. Phi Delta Theta led those negotiations while Brother McGoogan played an active role in the financial aspects. With the combined leadership of Georgia Alpha’s alumni volunteers, the chapter moved to the Greek Park in 2009.

Brother McGoogan has received the John B. Jackson Award from the Atlanta Alumni Club for outstanding alumni, and he also received the Advisor of the Year award from UGA.

John has been involved with the Georgia State Golf Foundation, both as a board member and as President of the Foundation. The Foundation oversees the awarding of college scholarships for deserving high school seniors. He has also served on the Board for Urology Research at Emory University. As an avid golf historian, Brother McGoogan assisted in the creation of history rooms at three clubs and the Atlanta History Center.

Brother McGoogan and his wife Jan, a Phi Mu from UGA, are residents of Atlanta.