Georgia Alpha was selected for one of Phi Delta Theta’s top awards – The Harvard Trophy.  These honors are determined for U.S. institutions according to the number of undergraduate male students and the number of social fraternities These awards are the Harvard Trophy, Founders, and Kansas City Trophies. 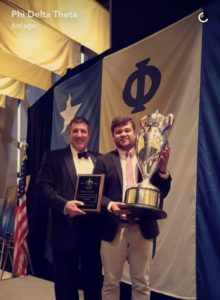 Above Brother Alex Jerreat accepts The Harvard Trophy on behalf of the chapter.

The idea for the Harvard Trophy was conceived when over 50 Phis, attending graduate school at Harvard University, were discussing the progress of the Fraternity. The award originated in 1924 and annually recognizes the single chapter among schools with 7,000+ male undergraduates who demonstrated excellence in all areas of chapter operations including scholarship, philanthropy, and overall day-to-day operations. 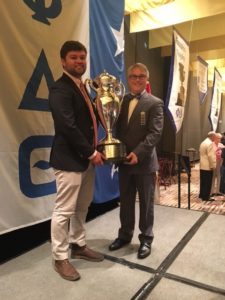 Providence President Rick Orr spoke to the huge success of UGA’s Ga Alpha, and noted a shared sense of pride among other chapters. He was quoted “I wanted to express how happy I was for each and every chapter, colony, and alumni club in Epsilon Province. I’m excited for the long, long overdue recognition of our GA Alpha alumni, and our award winning chapters — particularly Georgia Alpha. However there is one thing that I am proud of above all else. Something there isn’t an award for. In all my years of attending Conventions, I have never seen a greater demonstration of genuine brotherhood that occurred during that brief moment when Georgia Alpha was named winner of the Harvard Trophy. Other winners were applauded as they should. However two full tables of Epsilon Province actives, colony members, alumni club officers, spouses, and CAB members were all on their feet cheering in support of their fellow chapter. For me, it was a very special moment.” 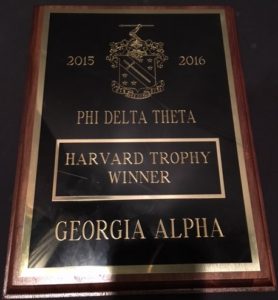